More than 95 million Americans suffer from digestive disorders ranging from constipation, diarrhea and irritable bowel syndrome to more serious conditions such as acid reflux (GERD), ulcerative colitis and Crohn’s disease. In fact, more than 35 million physician office visits a year are due to gastrointestinal complaints. Reports confirm that acupuncture and Traditional Chinese Medicine (TCM)  can offer relief from even the most complex digestive problems.

Diagnosis and Treatment of Digestive Disorders

Evidence that Traditional Chinese Medicine (TCM)  has been used for digestive disorders can be found in early medical literature dating back to 3 AD, where specific acupuncture points and herbal formulas for borborygmus (rumbling or gurgling in the intestines), abdominal pain and diarrhea with pain are discussed.

According to Oriental medical theory, most digestive disorders are due to disharmony in the spleen and stomach. The spleen plays a central part in the health and vitality of the body, taking a lead role in the assimilation of nutrients and maintenance of physical strength. It turns digested food from the stomach into usable nutrients and Qi (energy). Many schools of thought have been formed around this organ; the premise being that the proper functioning of the “middle” is the key to all aspects of vitality.

By taking into account a person’s constitution and varied symptoms, a treatment plan is designed specifically for the individual to bring their “middle” back into harmony and optimize the proper functioning of the digestive system. A variety of techniques can be used during treatment including acupuncture, lifestyle/dietary recommendations and energetic exercises to restore digestive health. 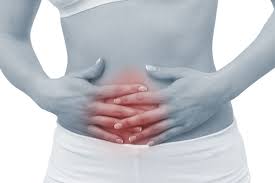 Ulcerative colitis is part of a category of diseases called inflammatory bowel disease (IBD), and it presents with inflammation in the lining of the large intestine, specifically the colon and sometimes the rectum. The lining becomes inflamed due to small wounds or ulcers, which then produce mucus and pus.

To be more specific, the condition occurs when the body mistakenly identifies food or other substances as foreign invaders. White blood cells are called up as part of an immune response, which proceed to cause inflammation and damage in the large intestine. Flare-ups may be triggered by stress, infections and certain anti-inflammatory drugs such as aspirin or ibuprofen. However, the exact cause of ulcerative colitis is not known, but medical researchers suspect a link between a person’s genetics, general state of the immune system and environmental factors.

Most people start showing symptoms in their 30’s since the disease advances slowly over time, and men and women are equally as likely to be affected. Children are also at risk and, in general, the younger a child is the more likely the symptoms and complications will be s

evere. Growth and mental development may be a problem in this case.

As there can be weeks or even months without a patient experiencing symptoms, when they do occur, they are referred to as flare-ups. The inflammation and ulceration associated with ulcerative colitis can cause pain and different problems, including frequent, watery diarrhea, persistent diarrhea with pain and bloody stool, urgent bowel movements, incomplete evacuation of the bowels despite a feeling of urgency, abdominal cramping, loss of appetite, weight loss, body fluid depletion, fatigue, fever or urgent diarrhea that wakes you up in the middle of the night.

The symptoms and how long they can occur for vary widely for each patient. Many sufferers report only mild or moderate symptoms, while others experience life-threatening complications such as severe dehydration and major bleeding from the colon.

Acupuncture and TCM is equipped to handle the symptoms of ulcerative colitis as demonstrated by a meta-analysis of different scientific studies conducted since the 1990’s. A team of researchers conducted a wide-scale analysis of 43 randomized, controlled trials investigating the efficacy of acupuncture and moxibustion for the treatment of irritable bowel disease. Of those 43 trials, 42 specifically analyzed and addressed ulcerative colitis.

Researchers then focused on 10 scientific studies that compared the use of acupuncture and moxibustion to the use of oral sulphasalazine for symptom relief. Sulphasalazine is a doctor-prescribed pharmaceutical drug that is commonly used in the treatment of ulcerative colitis and rheumatoid arthritis. After analyzing the studies, researchers concluded “acupuncture and moxibustion demonstrated better overall efficacy than oral sulphasalazine in treating inflammatory bowel disease.” This meta-analysis was performed by a team at the Shanghai University of Traditional Chinese Medicine in Shanghai, China. The study was published in the 2013 issue of Evidence-based Complementary and Alternative Medicine, a peer-reviewed medical journal covering alternative medicine. 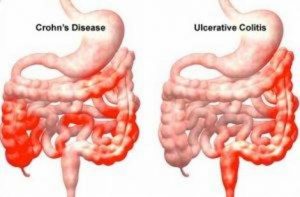 Crohn’s disease is a medical condition that can cause chronic inflammation anywhere in the gastrointestinal tract. Often, but not always, the inflamed tissue is specifically found in the ileum (the end of the small intestine) and the beginning of the colon. Inflammation can spread into the deeper layers of the tract and frequently has what is known as a “cobblestone appearance.” This refers to the fact that some patches of diseased tissue are found next to patches of healthy tissue.

Although all age groups are equally at risk, people 15-35 years old are most commonly affected. Crohn’s is a difficult condition to cure, so the main focus of treatment is to help manage symptoms with medication and dietary changes and, in some cases, surgery to repair or remove affected areas of the gastrointestinal tract. Because the disease is chronic, the individual may experience periods of flare-ups and aggravating symptoms, while at other times the person will have periods with no apparent symptoms at all.

It is important to receive an early diagnosis as untreated Crohn’s disease can eventually cause life-threatening symptoms such as fissures and fistulas. Fissures can cause excessive bleeding and pain. Fistulas happen when inflammation erodes tissue, causing the formation of a tunnel starting from the intestines, going to the urinary bladder, vagina or even the skin.

A study called Acupuncture Helps Crohn’s Disease Patients was published in the journal World of Gastroenterology, and it had some very promising results. It concluded that “acupuncture provided significant therapeutic benefits in patients with active Crohn’s disease, beyond the placebo effect, and is therefore an effective and safe treatment.” Even more encouraging, researchers also discovered that both lab scores and quality of life scores improved. This means that acupuncture and TCM is adept at handling the physical and emotional symptoms that often accompany the disease.

For the study, the acupuncture points selected for treatment focused on reducing inflammation in the intestinal tract. Each participant received three treatments per week for a total of 12 weeks. Additionally, moxibustion (moxa) was also used on four acupuncture points on the stomach. Moxa is a traditional technique that uses the smoke from the herb mugwort to penetrate the skin. In this way, it stimulates the body’s immune system. Often, the warm smoke provides a pleasant, comforting experience for the patient.

Diet is very important and the right choices can help reduce some symptoms. In general, acupuncture and Oriental medicine suggests refraining from eating raw and cold foods.

For some people, eating a heavy, spicy or fatty meal can produce the unmistakable signs of acid reflux. Symptoms can vary from a burning pain in the chest to a sour taste in the mouth as stomach acid and/or regurgitated food flows upward through the esophagus into the oral cavity. Although some may refer to these symptoms collectively as heartburn, the process is the same no matter what it is called. Additionally they may experience difficult or painful swallowing, sore throat, a dry, rough voice, or feeling of a lump in the throat that cannot be cleared away.

It is estimated that more than 20 percent of the general population is affected by acid reflux. While other groups are impacted, at least half of all asthmatic children experience symptoms, and pregnant women tend to suffer more than the average population, with half reporting severe symptoms during their second and third trimesters.

While it’s true for some people that symptoms can be mild or pass quickly, others go on to experience more severe ones. Sometimes symptoms of acid reflux can mimic the symptoms of a heart attack. This includes severe chest pain and a crushing sensation in the chest. Also of concern is the presence of black, tarry stools or black material in vomit. These are signs of bleeding in the stomach, a serious medical concern.

An acupuncture and Oriental medicine practitioner may recognize the symptoms of acid reflux as relating to the stomach organ. Two examples of diagnoses would be rebellious stomach Qi and food accumulation in the stomach. Qi is a vital energy necessary for all life to exist. Both of these diagnoses call for an acupuncture treatment that will redirect energy downwards, as should naturally happen just after eating or drinking. Rebellious stomach Qi is a perfect description for some of the symptoms of acid reflux.

The stomach, according to the philosophy of acupuncture and Oriental medicine, is needed to ripen and rot food. After this process of fermentation occurs, only then may the nutrients be extracted during the next phase of digestion. Without strong stomach Qi, issues regarding malnutrition may arise. This is why an acupuncture and Oriental medicine practitioner will need to evaluate a patient with acid reflux and address any nutritional deficiencies that may be present. Diet is very important in helping to calm symptoms. 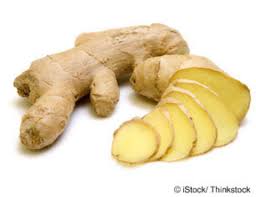 Ginger has been found to increase the secretion of gastric juice. In fact, ginger can be used for most digestive upsets that involve nausea, vomiting, cramping, abdominal pain, indigestion or diarrhea. This means that food is digested more quickly, creating an unfriendly environment for bacteria that could wreak havoc with your stomach and intestines.

In a study published in the October 2007 issue of the American Chemical Society’s Journal of Agricultural and Food Chemistry, researchers in Taiwan looked at the role of a ginger extract in blocking the toxin that causes 210 million cases of diarrhea worldwide. The toxin is produced by enterotoxigenic E. coli, which accounts for 380,000 worldwide deaths annually. The study found that zingerone, a compound in ginger, was the likely compound responsible for blocking the toxin.

Whether your digestive problem is due to eating contaminated food, stomach flu, pregnancy or motion sickness, ginger is one of the most effective agents around!

Nausea can range from mild queasiness to serious distress. While not classified as a disease itself, it is an indicator that something else is wrong.

Depending on the severity and duration of vomiting, some level of dehydration may occur. In severe cases, this may become a medical emergency. Small sips of warm water may help the patient stay hydrated or, if this is not tolerable, sucking on ice chips may help.

Acupuncture and TCM offer some simple acupressure techniques you can perform at home to help alleviate nausea. The first exercise involves the acupuncture point called Pericardium 6 (P6), or Inner Gate. To locate this point, place your hand with the palm facing up. Starting from the middle of the wrist crease, place three fingers down below your wrist. Your index finger should be in the middle of two tendons.

If you are having trouble locating the tendons, flex your wrist and they should be displayed more prominently.  Press Inner Gate lightly with the pad of your thumb. You can slowly increase pressure and go deeper into the point. Continue this exercise for up to five minutes if you are using heavy pressure.

Some people experience more relief from nausea when they continuously press with gentle to moderate pressure. If this is the case for you, it is safe to apply acupressure for longer periods of time.

If nausea still persists after applying acupressure at Inner Gate, you can activate its partner point, called Outer Gate or San Jiao 5 (SJ5). It is found on the opposite side of the forearm from Inner Gate. With your thumb on Inner Gate and your middle finger on Outer Gate, complete the circuit by squeezing the points together using moderate pressure. Hold for a few seconds and then release. This can be done for up to five minutes.